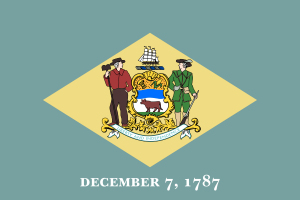 Adopted on July 24, 1913, the Delaware state flag has a background of colonial blue surrounding a diamond of buff color in which the coat of arms of the state is placed. Below the diamond are the words “December 7, 1787,” indicating the day on which Delaware was the first state to ratify the United States constitution. Because of this action, Delaware became the first state in the Union, and is, therefore, accorded the first position in such national events as presidential inaugurations. According to members of the original commission established to design the flag, the shades of buff and colonial blue represent those of the uniform of General George Washington. Inside the diamond, the flag recognizes the importance of commerce {the ship} and agriculture {wheat, corn, the ox and the farmer} to the state. Tribute is also paid to the revolutionary war soldiers. The words in the ribbon banner read Liberty and Independence.

On the Eastern Seaboard of the United States, Delaware is bordered by the Atlantic Ocean and Delaware Bay, as well as by the states of New Jersey, Pennsylvania and Maryland. Delaware’s location affords easy access to the major metropolitan areas of the Northeast. Washington, D.C., Philadelphia, and Baltimore are all within a 2-hour drive.

Delaware became a state in 1776, just two months after the signing of the Declaration of Independence. The capital was moved from New Castle to Dover in 1777. Delaware’s first constitution was adopted in 1797. The current constitution was adopted in 1897. It has been modernized with many new amendments since that time. Today, Delaware has a cabinet form of government.

The State Supreme Court consists of a chief justice and four associate justices. All members are appointed by the governor, with confirmation by the Senate, for a term of 12 years.

Delaware’s climate is moderate year round. Average monthly temperatures range from 75.8 to 32.0 degrees. Average temperature in the summer months is 74.3 degrees. About 57% of the days are sunny. Annual precipitation is approximately 45 inches. Temperatures along the Atlantic Coast are about 10 degrees warmer in winter and 10 degrees cooler in summer. The average growing season varies from 170 to 200 days. 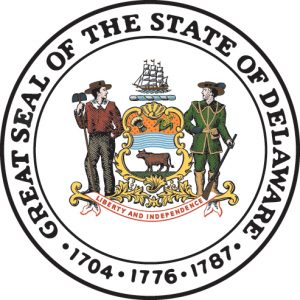 The state seal was first adopted on January 17, 1777, and contains the coat of arms. It also bears the inscription around it “Great Seal of the State of Delaware” and the dates 1793, 1847, and 1907. Descriptions of the contents of the seal are as follows:

Delaware is known by this nickname due to the fact that on December 7, 1787, it became the first of the 13 original states to ratify the U.S. Constitution. “The First State” became the official State nickname on May 23, 2002.

Thomas Jefferson gave this nickname to Delaware, according to legend, because he described Delaware as a “jewel” among states due to its strategic location on the Eastern Seaboard.

This nickname was given to Delaware after the fighting Blue Hen Cocks that were carried with the Delaware Revolutionary War Soldiers for entertainment during Cockfights.

This nickname was given to Delaware due to its size and the contributions it has made to our country as a whole and the beauty of Delaware.

The official state song consist of a poem “Our Delaware” containing three verses in honor of each county of the State, written by George B. Hynson; a fourth verse in praise of the State and pledging the loyalties of its citizens, written by Donn Devine; and a musical score composed specifically for the state song by Will M. S. Brown”.

Passage of the act to adopt the Peach Blossom on May 9, 1895, was prompted by Delaware’s reputation as the “Peach State,” since her orchards contained more than 800,000 peach trees yielding a crop worth thousands of dollars at that time.

Adopted on April 14, 1939, the Blue Hen chicken had long been used as a motif in numerous political campaigns and in many publications. During the Revolutionary War, the men of Captain Jonathan Caldwell’s company, recruited in Kent County, took with them game chickens that were said to be of the brood of a famous Blue Hen and were noted for their fighting ability. When not fighting the enemy, the officers and men amused themselves by pitting their Blue Hen chickens in cockfights. The fame of these cockfights spread throughout the army and when in battle, the Delaware men fought so valiantly that they were compared to these fighting cocks.

Adopted May 1, 1939, the American Holly (Ilex opaca Aiton) is regarded as one of Delaware’s most important forest trees. Often called Christmas holly or evergreen holly, the tree has dark, thorny-leaved foliage and red berries. In Delaware, the tree can reach a maximum of 60 feet in height and a trunk diameter of 20 inches.

Adopted April 25, 1974, the Lady Bug was chosen by the Legislature after an intensive effort on the insect’s behalf by Mrs. Mollie Brown-Rust and her 2nd grade students of the Lulu M. Ross Elementary School in Milford, Delaware.

In recognition of sport fishing’s overall recreational and economic contributions to the state of Delaware and of the specific values of the weakfish (Cynoscion genus) as a game and food fish, the state Legislature adopted the weakfish as Delaware’s State fish in 1981. This fish is also known as sea trout, gray trout, yellow mouth, yellow fin trout, squeteague, and tiderunner.

Milk was made the official State beverage on June 3, 1983.

Adopted June 24, 1996, Sweet Golden Rod (Solidago odora) was named Delaware’s State herb. Members of the International Herb Growers and Marketers Association of Delaware suggested that the herb “Solidago Odora”, commonly known as “Sweet Golden Rod”, because of its beautiful golden blossoms, would be especially appropriate as the designated herb.

Sweet Golden Rod is both indigenous to Delaware and widespread throughout the State where it is commonly found in our coastal areas and along the edges of marshes and thickets.

The belemnite was, in essence, a squid with a conical shell. It is an extinct member of the phylum Mollusca, which includes clams, snails, squids and octopuses. Belemnite fossils can be easily found along the Chesapeake and Delaware Canal, which is where the Quest Students collected specimens during a filed trip.

Adopted on June 10, 1999, the Tiger Swallowtail (Pterourus glaucus) was declared the State’s official butterfly. The tiger swallowtail, a large, yellow, black-striped butterfly, is indigenous to Delaware and can be seen in deciduous woods, along streams, rivers, and wooded swamps, and in towns and cities throughout Delaware. Three butterflies were chosen by students of the Richardson Park Learning Center as possible State butterflies; then 1,611 out of 3,175 public and parochial students all over the State voted to suggest to the Legislature that the tiger swallowtail be named the State’s butterfly.

Since Greenwich loam (a course, loamy, mixed, semiactive, mesic, Typic Hapludult) is commonly found in all counties in Delaware and enhances water quality, agriculture, wildlife habitat, and natural landscape beauty, it was adopted as the State soil on April 20, 2000.

On June 30, 2000, the Delaware Diamond, located in the constellation of Ursa Major (Great Bear), with coordinates of right ascension 9h40m44s and declination 48�14’2″, was designated as Delaware’s State star. It is a star of the 12th magnitude and is the first star on the International Star Registry ever to be registered to an American State. It can be seen with binoculars or a telescope. Twelve-year-old Amy Nerlinger of Wilmington named the star through a contest sponsored by the Delaware Museum of Natural History in the summer of 1999.

Recognizing its great importance and value, the horseshoe crab was designated as Delaware’s official marine animal on June 25, 2002. These crabs contain a compound, limulus amebocyte lysante (LAL), that is used to detect bacterial poisons in certain medications, vaccines and medical devices. Chitin, a natural polymer found in the horseshoe crab’s shell, is used to make bandages. The crab is used in vision studies because their complex eye structure is similar to the human eye. It is the principal food source for over a million shore birds. Delaware Bay is the home to more horseshoe crabs than any other place in the world.